Texas is arguably the king of whitetail deer hunting destinations, supporting an estimated population of approximately 4,000,000 whitetails. When you combine the large private properties, which characterize much of the state, along with the allure and appeal of the brush, cactus, Mexican food, Texas drawls, and a friendly culture, you have the makings of a grand hunting experience. Wildlife Systems is a San Angelo, Texas based hunting operation that has built a reputation of being one of the prevalent deer hunting outfitters in Texas for over 31 years.

Why Hunt Whitetail Deer With Us?

If you are looking to book a hunt with a veteran outfitter, you’ll be hard pressed to find a more seasoned and proven hunting operations than Wildlife Systems, which built its core business model around whitetail deer, and simply put, this company is one of the most diverse deer hunting outfitters in the business. We currently provide guided whitetail hunts on over 100,000 acres, which is made up of several different ranches located in various areas of Texas including North, South, Central, and West Texas. Since 1987, we have hosted hunts for approximately 3,500 whitetail hunters, and we have never had a given season where less than 90% of our hunters harvested a buck. We can easily accommodate various hunting needs, whether it is single hunters, families, or corporate groups, and we can also cater to young or older hunters, as well as those with limited physical capabilities.

Description of Hunting Properties and Camps

One aspect of our whitetail deer hunting program that makes us so unique is our diverse land base. We are currently offering whitetail deer hunts on 8 different properties totaling over 100,000 acres, with several of these properties ranging from 10,000 to 27,000 acres in size. Some of these hunts take place on high fenced properties and some on low fenced country; we currently offer no hunts for pen-raised deer, which has become common on many big whitetail deer operations in recent years. These hunts take place in several popular deer hunting regions of Texas, including the Brush Country of South Texas, the Hill Country of Central Texas, as well as the Rolling Plains region in Western Texas.

Quality free-range deer hunts have become less available in recent years, and we currently offer free-range whitetail hunts out of three camps which access acreages of 21,000, 25,000, and 27,000 acres. So, for any hunters who are looking for a traditional deer hunt on low-fenced country, where whitetail deer numbers are good and where there is plenty of maturity on bucks, Wildlife Systems has some great options available. Also, please know that our high-fenced properties that we hunt are made up of native deer; we do not hunt deer that have been released, and no deer with ear-tags or tattoos. These deer are the real deal, born and raised out in the pasture and not in a pen.

These hunts take place from a variety of different types of camps, from basic ranch houses to new, well-appointed hunting lodges. All of our camps are clean and comfortable with modern amenities, but a few camps are a bit flashier and newer than the others. Most sleeping arrangements are either two or three person occupancy per bedroom, and some of our Texas hunting lodges are more suitable for husband/wife combos, than others.

Why Are Our Texas Whitetail Hunts Priced Differently?

This is a very common question. Our whitetail hunts are often priced based on location of property and intensity/cost of the management program. Simply, all things considered equal, you will generally pay more for South Texas whitetail hunting than any other region in the state, thus our South Texas whitetail hunts are priced accordingly. Additionally, our high fenced properties are generally priced higher due to the cost of administering the program. As a rule, our higher priced whitetail deer hunts will yield a little stronger average on buck sizes, but there are occasionally exceptions to this, and in some years we will take our largest bucks on our less expensive hunts. Total buck numbers are as high as, or even higher, on our lower priced deer hunts than our more expensive hunts. If you are looking for a deer hunt in Texas, give us a call at 325-655-0877 for further details.

What Is Furnished on These Hunts?

All our whitetail hunts are set up as all-inclusive, package type hunts. Guides, meals, lodging, and game care which include skinning, caping of heads, and quartering of meat, are all included with price of hunt. Some of these hunts are set up as one guide per two hunters, and other deer hunts are set up as one on one. Three meals daily are provided, and our cooks specialize in Southern style dishes that will satisfy most any taste preferences, and we assure you, you will not go hungry. Airport shuttle may be included from the nearest airport for an additional fee, but arrival and departure times are conditional, so you need to check on this if you want us to provide shuttle service.

Our Texas whitetail deer hunting license is unlimited, “over the counter,” and involves no draws or lotteries. We will send you a Prep Packet full of miscellaneous information, and you simply fill out a form and send it back to us. We will process and print out your license in our office prior to your arrival on your Texas deer hunt. If you are a Texas resident or if you simply want to procure your own license, you can simply note that on the Hunter Profile that is included in the Prep Packet.

Current cost of nonresident Texas deer hunting license is $315. There are no age restrictions in Texas, so we do get a fair amount of youth hunting interest, and their license is only $7.00.

Our whitetail hunting methods sometimes vary, depending upon which property we are hunting, time of season, hunter’s ability and interest, and intuition of guide. We employ a combination of methods including stand hunting, spotting and stalking, antler rattling, still hunting, and a limited amount of safari style or vehicle hunting. Our stands vary from comfortable enclosed box hunting blinds to portable tripods, portable cloth blinds or pop-ups, and occasional brush blinds. Generally speaking, blind hunting will provide the greatest chance of viewing a large number of deer and taking a quality mature buck on our hunts. It is legal to deer hunt over feed in Texas, and we do a large amount of feeding, which allows us to localize deer, making them a bit more visible. We can accommodate most physical abilities on these hunts.

What Can You Expect on Your Deer Hunt?

Wildlife Systems will give you an honest, professional effort at taking care of your needs on these hunts. You will be fed well, treated courteously, with a staff that is instructed to be attentive to personalized service. You can expect to see tremendous game numbers on our deer hunts, and it is common for each hunter to see 8-15 bucks daily; some hunters may likely see 20-30 bucks in a day’s time. The size of the bucks that our hunters see and take will generally be commensurate with how the hunt was promoted, and virtually all of our harvested bucks will have over 8 points and approximately 75% will have nine points or more, with spreads typically ranging from 17” - 22”. We have taken whitetail deer up to 21 points and spreads up to 27.5” on our whitetail hunts.

Another attractive feature of deer hunting in Texas is the pleasant weather conditions that are generally found during the fall time of the year. Though is can vary from October through January, rarely are temperatures much below freezing, with the norm often finding lows being in the 30’s and 40’s at night and highs often being in the 70s and low 80s during the day. Further, this is often the dry time of the year in these areas of Texas, so we rarely lose any hunting time due to rainfall, and should we happen to encounter rainy conditions, our enclosed box blinds allow us to continue to hunt through these periods with no major distractions. So, it you do not like hunting in sub-freezing temps that are often the norm of other regions, you may want to consider joining Wildlife Systems for a great experience with comfortable conditions.

Note: Please know, the recent accelerated increase of giant whitetail bucks being taken that score 200”-300”, or larger, is a direct function of the increase in the large number of pen-raised bucks that are often grown out in half-acre pens and released onto high-fenced preserves. Many of these deer are products of artificial insemination, medicated practices with a broad assortment of drugs, and some of these deer were intentionally orphaned from their mothers and bottle-raised to create a more docile animal. If you are not interested in shooting a pen-raised deer, you may want to specifically inquire before booking your hunt with whichever outfitter you are discussing such hunting possibilities. Wildlife Systems does not currently offer these types of hunts. 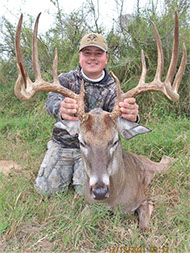 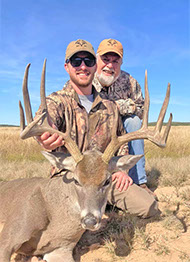 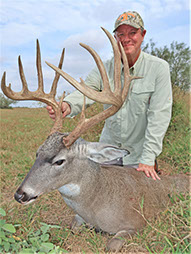 Check out some of our whitetail videos